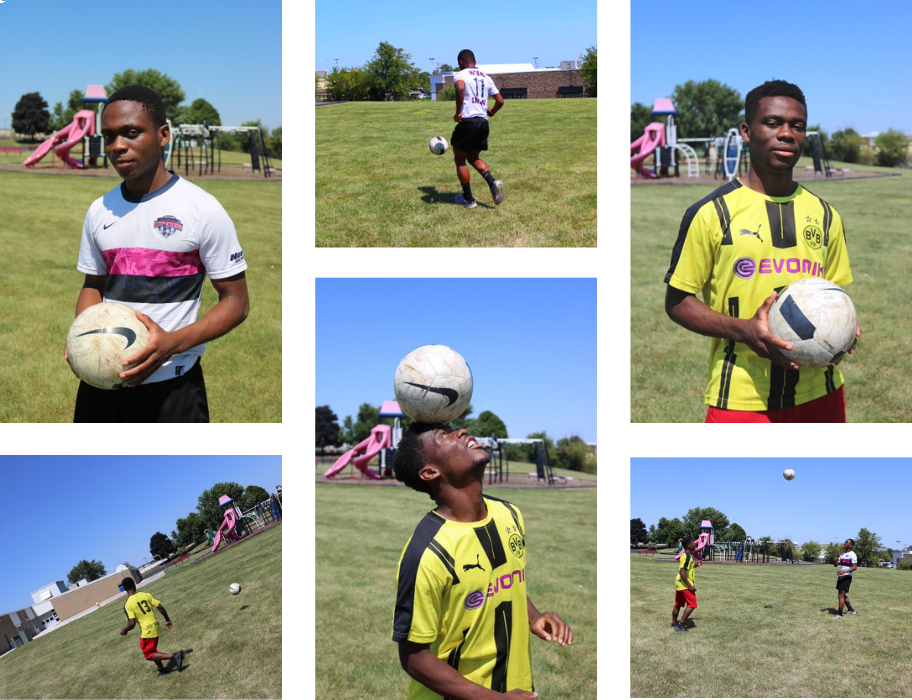 Written September 17, 2020
By Michelle Wong
Comment on this entry

Brothers and student athletes Livre and Best Emena come from Carol Stream, IL. Originally, the boys are refugees from the Democratic Republic of Congo, but since their arrival in the USA in 2012 via World Relief, they’ve been making waves both on and off the soccer field. Occasionally, the stars align and they, along with their other brothers, get to play on the same team. Then, it’s like magic. Today, Fruitful Yield in partnership with Vega Sport will dig into their trials and triumphs in athleticism. Livre is one of the oldest Emena brothers. His younger brothers and teammates often look to him to "set an example".

FY: Where did your love for soccer begin?

Livre: Originally, my family is from the Democratic Republic of Congo. There was a war that took place in 1996, so as a result, they fled to a refugee camp in Tanzania. That is the place where I have a lot of childhood memories. I remember being a little kid and we’d get plastic bags and wrap them around each other, and play with them as a soccer ball. Some of the people around Isaya (the family's other eldest brother) and I took a roasted potato and we’d have the potato as a prize. They'd have me and Isaya play against each other for the potato and we’d go at it! Ever since, soccer became a part of me, everywhere I went. I can’t remember a month not playing soccer, besides [during the time of my injury].

FY: What was your favorite soccer moment?

Livre: Professionally, the highest I’ve played is semi-pro for Dekalb County United. I think it was after we were done exercising, the coach set us up in a line, and had us race. I point that out in particular, seeing the team run. You see how you fit in with everybody’s speed – not that I use that to compare myself or judge other players.

Personally, I have a friend whose name is David. In high school, David had a cancerous brain tumor in 2016. We were pretty close, and it was heartbreaking to see. He was about our age, but he had to skip a soccer season and he couldn’t even go to school. Even though this was happening to him, he came to a couple of our games. In my senior year of high school, he came to watch us play against Bartlett. That game, I played it for him... I went the whole game just thinking about him. I remember scoring 4 goals. For 3 of those goals, I walked up to him and just told him how much I loved him as a person. That was one of my favorite moments.

FY: Did you end up winning that game?

FY: Best, were you playing that game?

Best: Yes, I was also playing that game. He says, "We all went to him at the end of the game. It was emotional; he expressed his gratitude--how thankful he was to have everybody around him.

FY: Livre, we know you injured your knee last year. How did that happen?

Livre: The way it happened, it was an indoor game, one-on-one. It was me and a defender. I had the ball, and I tried to beat him on the right to beat him with speed. I managed to do that, but the defender was fast too. By the time I got to the ball and managed to take the shot, he got to me and he shoved me. He got a foul, it so happened. When I landed, I couldn’t feel my knee and I couldn’t get back up. I had heard a slight pop inside, and the landing made it worse. When I landed I went all the way down.

FY: What was going through your mind?

Livre: That was the first time something like that happened to me. I thought it’d be a couple weeks or a couple months for it to cool off. It so happened, a couple weeks later, I went to try it out but it wasn’t feeling right. Then, I went to the doc. Initially, they didn’t see anything wrong with it, so I requested a second opinion. He took a deeper look into it, and that’s when he found out it was a torn meniscus. They repaired the meniscus Sept 20th 2019. I’ve been doing a lot of rehab ever since.

FY: How are you feeling, and have you been playing with your brothers?

Livre: I feel good. The healing process is very slow, but it’s one way of learning about myself and my body. It’s a blessing and a curse having my brothers at the same time. They want to push me, which is good but it’s hard to strike that balance of when they need to push me or not.

FY: What got you through it?

Livre: It’s very hard, especially in the initial stages of when it first happened. In the past, I can’t remember going a month without touching a soccer ball. You know, I get constant encouragement from my brothers. Every once in a while, we get together to watch a game or play FIFA. On the mental side it’s a little hard, blaming myself and being hard on myself. I get negative thoughts in my head, like, "How stupid can you be, look where you've ended up?" It's those kinds of thoughts. Along the way, I've learned to keep myself positive, focus on the positive aspects of what’s happening all around me. It’s taking a lot from me to stay positive, to have a positive outlook on life, and my soccer career.

FY: What did you do to recover?

Livre: I’ve had a couple therapists: a basic one that makes sure I’m able to walk, jog, and do the basic stuff. It’s hard too, as I can’t get a specialist, for the financial aspect. They’ve been moving me between the general specialist and the trainer. We’ve been doing a lot of basic stuff like stretching, lunges, squats, and biking here and there. That’s it mainly. I’ve been working with a physical therapist; I like him more than any others in the past. With the things we’ve been doing, I feel that if I stick with them, my knee’s going to continue getting stronger and stronger.

FY: Any advice or encouragement for others on how to face an injury that keeps you from doing what you love?

Hmm, I’d say first thing to do, in case of injury, is to be disciplined and follow what the doctor or therapist tells you. Before branching out and doing your own thing, talk to them. Get their opinion on that too! I had to learn that the hard way.

Played for: Glenbard North, College of DuPage, and University of the Incarnate Word Best is the 3rd oldest son, known for bringing joy and laughter to those around him, not to mention his A-game.

FY: Some might call you the funniest Emena. How do you bring a sense of humor to the field?

FY: Not to get controversial, but who is the best soccer player of the family?

(Both of the boys laugh.)

Best: I don’t think I'm technical enough to make that call. For me, I’ve always been inspired by my brothers. I think the best player was Livre. Though, his injury slowed him down as being the leader on the field. I’d say the leader now is Ode (the 4th eldest Emena brother) if you compare him overall: his skills, communication, and understanding of the game. He knows how to read the game. There’s a few things Livre or I might be better at than him. But overall, he’s starting to surpass us.

Livre: When it comes to different positions on the field, there are only a few guys who can match Best in the defensive position. In the middle, there's no question: it’s all Best. Other positions, it’s probably Ode defensive-wise.

Best: It evens out; it all depends on the position.

Livre: I think you’re the best cheerleader there is. There’s got to be a best everything, right?

FY: How was life on the College of DuPage Team?

Best: It was fun, good to see different players from different backgrounds. I played against a lot of those players in high school, so, us coming together to make a team was something I enjoyed. The coaching style was different too; it's always good to learn something new. My coach in the past had me playing center-defensive mid-field. My coach told me I had to be more versatile moving to different positions. If you’re a soccer player, you have to be willing to play any position on the field, especially if your coach tells you to do so.

FY: Sounds like you have a broad skill set. What’s next for you in soccer?

Best: I’m going to the University of the Incarnate Word in San Antonio, TX. I’m going to Texas! With COVID and everything, our season got pushed back to spring, but my team and coaches are taking this time to train. I have actually not met a lot of the players. So, now is the time to unite, embrace each other, build the program, and face the challenges ahead.

That sounds like a great plan for all of us, Best! We hope our readers enjoyed this interview with Livre and Best. Hopefully, their story of hard work, never giving up, making the most of what you're dealt, and always pursuing your passions empowers you today. Find Vega Sport products on Fruitful Yield shelves throughout Chicagoland.